As we watched and recorded over 90 Labour Tenants and supporters march to the Land Claims Court in Randburg, Johannesburg, on Friday 29th January, I found myself awash in a whirl of emotions. Hope, elation and anxiety all swirled along with the familiar songs and chants, memories of struggles past of which I had only read, the loud blaring of the police sirens, and the sun already high and holding the promise of the heat of the long day ahead. 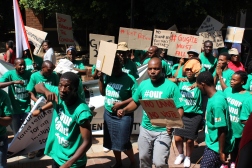 As an advocacy-focused land rights non-governmental organisation (NGO), the Association For Rural Advancement (AFRA) works to empower communities to understand and be able to express and realise their rights, and to voice their stories directly. There remain, however, spaces within which we inevitably find ourselves writing and speaking on their behalf, particularly when it comes to complex legal arguments and Court processes.

It was therefore especially significant to have as many Labour Tenants as we could afford to mobilise come to the Court itself on this day, despite the great distances, high costs, and the need for them to travel through the night without any sleep in order to attend.

Sakhe Mchunu, from the Ravensworth Community in uMshwathi, KwaZulu Natal, comes from a Labour Tenant community that has worked with AFRA at various times over the last two decades as they have searched for solutions to a wide array of challenges. He has attended countless meetings with landowners, Government Departments and AFRA itself to try and negotiate reasonable settlement options, and while he has shared with me his frustrations at the many years of what has sometimes felt like hopeless struggle, he has yet to give up. Speaking to the media outside the Court on Friday he expressed his wish: “Being as we are here, we hope that the Court can assist us to pressurise the Government to bring back the land to the farm dwellers.”

His words express the hopes of around 19,000 Labour Tenant claimants across the country, who have been waiting since 2001 – when the period for submissions under the Land Reform (Labour Tenants) Act ended – for the Government to process their claims to the land which they, their parents and grandparents lived on and used.

We have written a great deal about the history of the case that has dragged on for a number of years, and you can read more of that history, and the background to the case below:

We had hoped to leave the Courtroom on Friday having set legal precedent by persuading Judge Mokotedi Mpshe of the importance and benefits of ordering the appointment of a ‘Special Master’, who would in essence play an independent monitoring role, and be able to supervise the work of the Department of Rural Development and Land Reform to a much greater extent than the Court has the expertise or capacity to do.

What we left with instead was the reassurance that Judge Mpshe recognises and acknowledged the importance of this case for successful land reform in South Africa, and for realizing the Constitutional rights of some of our most vulnerable citizens.

Anyone working in or observing the land sector knows that progress is often painfully slow and frustrating, and while it was disheartening to hear Judge Mpshe state that we should harbour no illusions that Labour Tenant claims will all be processed before 2020, after 15 years of waiting and three years of negotiation, broken promises and legal tussling, there is certainly still much to be hopeful about.

We will return to the Land Claims Court on the 18th March 2016 with the opportunity to present our legal arguments in greater detail, and we remain firm in our belief that whether or not the Court accepts the importance of appointing a Special Master, they will not continue to tolerate the delays of the late and incomplete reports submitted by the Department as they fall further and further behind on their own implementation plan, and will provide some form of relief to the claimants.

Another hugely positive outcome from the day was the widespread support that AFRA and the Labour Tenants we represent experienced on Friday. From excellent national media coverage ranging from newspapers, magazines, and radio to live television, to passers-by asking what we were protesting about and offering words of encouragement, the support was palpable and welcomed.

We were also hugely appreciative of the numerous social movements and NGOs from across the country who travelled to be with us on Friday, and offered words of encouragement to the Labour Tenants who were there.

From the Tshintsha Amakhaya civil society alliance for land and food justice in South Africa we were joined by fellow members the Southern Cape Land Committee, the Surplus People’s Project, the Nkuzi Development Association, the Women On Farm Project and our greatly-valued partners in the legal case itself, the Legal Resources Centre.

We furthermore had representatives from the Landless People’s Movement, the KwaZulu Natal Christian Council and the Rural Women’s Assembly with us throughout the day.

‘Aluta Continua!’ we repeat to ourselves and each other, the mantra of many struggles; and the struggle does indeed continue, but not without hope. Victory may not come swiftly, or in the forms we necessarily imagine, but with South Africa’s powerful Constitution on our side, we can continue to say with confidence, ‘A vitória é certa‘- victory is certain.

Want to join the discussion?
Feel free to contribute!